The G3 is a 7.62×51mm NATO battle rifle developed in 1956 by the German armament manufacturer Heckler & Koch GmbH (H&K) in collaboration with the Spanish state-owned design and development agency CETME

The G3A3 (A4) is a selective-fire automatic weapon that employs a roller-delayed blowback operating system. The two-piece bolt assembly consists of a breech (bolt head) and bolt carrier. The bolt is held in battery by two sliding cylindrical rollers that engage locking recesses in the barrel extension. The breech is opened when both rollers are compressed inward against camming surfaces driven by the rearward pressure of the expanding gases upon the bolt head. As the rollers move inward, recoil energy is transferred to the locking piece and bolt carrier which begin to withdraw while the bolt head slowly moves rearward in relation to the bolt carrier. As the bolt carrier clears the rollers, pressure in the bore drops to a safe level, the bolt head is caught by the bolt carrier and moves to the rear as one unit, continuing the operating cycle. The bolt also features an anti-bounce mechanism that prevents the bolt from bouncing off the barrel’s breech surface. The spring-powered claw extractor is also contained inside the bolt while the lever ejector is located inside the trigger housing (actuated by the recoiling bolt) 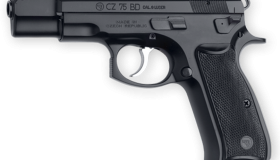